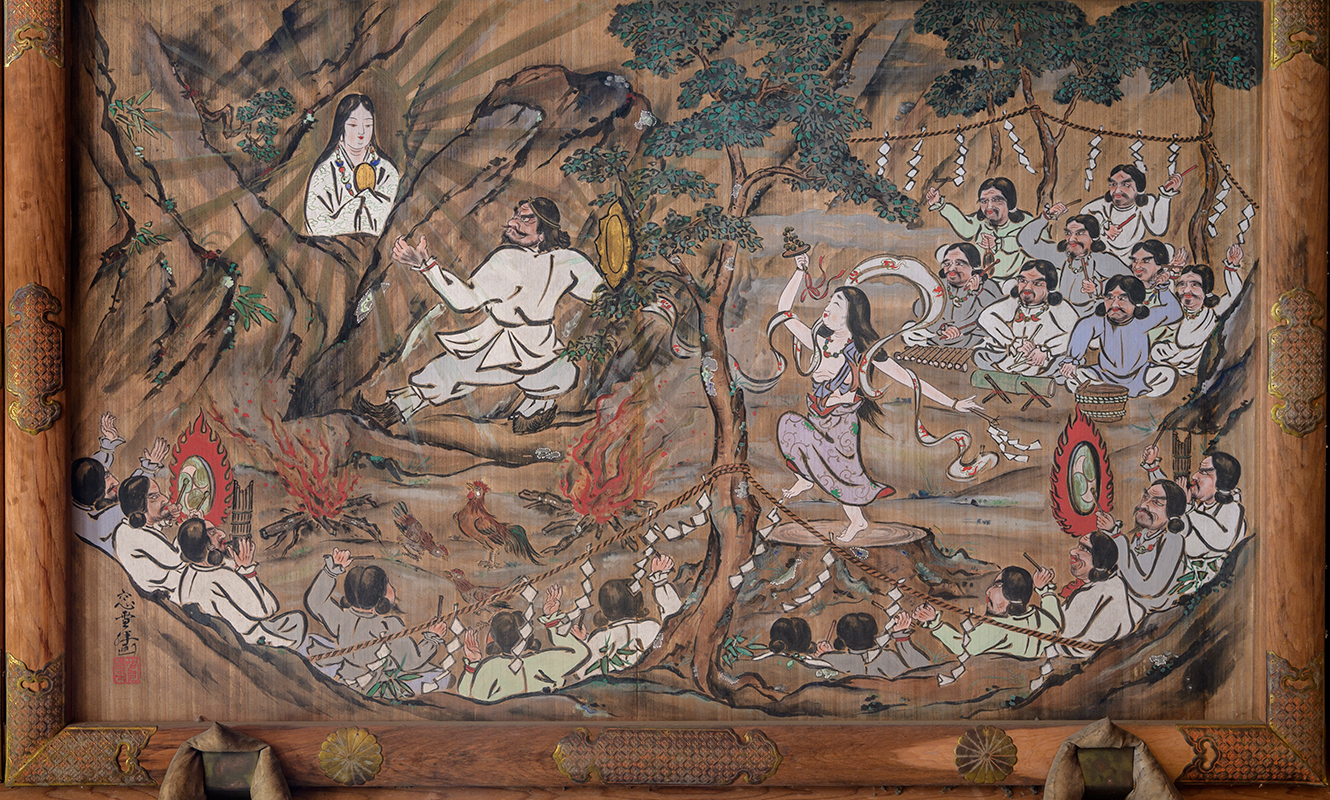 Located at the foot of one of those sacred mountains, Mt. Togakushi, Togakushi Shrine consists of five shrines: Okusha, Chusha, Hokosha, Kuzuryusha, and Hinomikosha. They enshrine Shinto deities related to a religious myth of the rock cave called Ama-no-Iwato located in Takamano-hara (the deities’ heavenly abode). According to the legend, Amaterasu-Omikami, the deity of the sun and love, was so upset with the violent behavior of her younger brother Susano-o that she hid in the cave behind a rock door, which brought the world into darkness and confusion. Greatly troubled, all the deities discussed how to get her to come out and decided to have a festivity outside with songs and dancing to bring her out.

Wondering what was happening outside, Amaterasu slightly opened the door, and then another deity named Ame-no-Tachikarao-no-Mikoto pushed the door open welcoming her back. It is said that the door fell to Earth and became Mt. Togakushi.

With its long history, the Togakushi Shrine has also enshrined Kuzuryu-Omikami (the deity of water and harvests who has nine dragon heads) as a local deity to protect the area, along with the deities mentioned above. It is said that the origin of worshipping Mt. Togakushi included water, which is essential to life in this world. During this time mountains were considered places where deities resided. Later, when Tendai Esoteric Buddhism was introduced to Japan, Kenkoji Temple (known today as Togakushi Shrine) was established at Mt. Togakushi, where the local people could adopt Buddhism along with Shinto which is indigenous to Japan. In fact, worshipping Mt. Togakushi was also integrated with mountain asceticism called Shugendo, leading to the popularity of this sacred mountain across Japan. Walking around the mountain, monks rigorously disciplined themselves to seek enlightenment at the temple, which also became a popular place among the general public for worshipping and enlightenment for centuries.

At the beginning of the Meiji era in1868, an edict was issued ordering the separation of Shinto and Buddhism, forcing Kenkoji Temple, which synchronized Shinto and Buddhism, to decide which religion it should take. As a result, Shinto (notably Shrine Shinto) was chosen giving up all its Buddhist traits, and thus becoming Togakushi Shrine, even though the ancient belief originating in Mt. Togakushi was mountain worship.

Enshrined deity
Ame-no-Tachikarao-no-Mikoto
History and Blessings
This shrine was originally made for enshrining Ame-no-Tachikarao-no-Mikoto (the deity of power) at the foot of Mt. Togakushi. This deity is responsible in one of Japan's myths for opening a rock door to a cave entrance with his divine power in order to bring out Amaterasu-Omikami (the deity of the sun and love) who was hiding within.
As the main shrine of Togakushi Shrine, the Okusha shrine offers blessings including good fortune, wish fulfillment, good harvests, and winning in sports. These beliefs have been spread across Japan to gather a lot of worshippers.
The approach to the shrine is approximately two kilometers long, having a red gate with thatched roof named Zuishinmon in the middle of the path. This is followed by giant cedar trees over 400 years old along the road on both sides, which are a part of a forest reserve designated as a natural monument.

Enshrined deity
Ame-no-Yagokoro-Omoikane-no-Mikoto
History and Blessings
When Amaterasu-Omikami hid in a cave due to the violent behavior of her younger brother Susano-o-no-Mikoto, the deity Ame-no-Yagokoro-Omoikane-no-Mikoto came up with a special song and dance called the Iwato Kagura, or Daidai Kagura, to entice the goddess to open the rock door. This shrine offers blessings for academic achievement, business prosperity, good fortune, expulsion of evil, and family well-being.
The ceiling of the hall is decorated with a picture of a dragon originally drawn by Kawanabe Kyosai, a virtuoso artist from the Kano school of Japanese painting, which was restored in 2003.
In the ground, there is a sacred giant cedar tree over 700 years old, along with Sanbon Sugi, which are three cedar trees over 800 years old placed in a triangle. The head office of Togakushi Shrine is also located here in Chusha.

Enshrined deity
Ame-no-Uwaharu-no-Mikoto
History and Blessings
Proceeding along the old cedar tree path and climbing up more than 270 stone steps leads to the solemn shrine hall with some distinctive features remaining from the times when this place combined Shinto and Buddhism. The glory of the shrine attracts reverence from many of worshippers.
Ame-no-Uwaharu-no-Mikoto being the son of the deity enshrined at Chusha, this shrine offers blessings of pioneering, academic and entertaining achievements, sewing, safe delivery, and protection of women and children.

Enshrined deity
Kuzuryu-no-Okami
History and Blessings
There is no public record left about when this deity was enshrined, but he was already being worshipped as a local deity before Ame-no-Tachikarao-no-Mikoto. He has been respected as the deity of water, rain, protection from tooth decay, and marriage and love.

History and Blessings
Established around 1098 A.D., the Hinomikosha shrine enshrines four deities, with Ame-no-Uzume-no-Mikoto who danced in front of the rock door, as the main among them.
This is the only shrine in the mountain which remained as a shrine even during the time when Shinto and Buddhism coexisted with each other. The Togakushi Daidai Kagura song and dance for the deities has been passed down by the priesthood working for this shrine. The blessings of the deities here are for entertainment, marriage and love, and fire prevention.
The number of worshippers to this shrine have been increasing over the years. In the ground, there are also two giant cedar trees over 500 years old called Fufu-no-Sugi (husband and wife twin cedar trees) and Saigyo Zakura (a famous cherry tree related to Saigyo who was a famous priest-poet in the 12th century).

The Shrine Crest of Togakushi Shrine

Do you know about Togakushi Shrine’s crest?
It is a swastika made of four sickles called a Kamamanji.
Originally, the deities enshrined in Togakushi were for water and harvests. They have been very familiar and close to the Japanese people since the ancient times because rice was their staple food. Even today, worshippers visiting Mt. Togakushi always bring rice to dedicate to the shrine, which reflects the ancient beliefs. It is said that this strong relationship between the deities and the local people resulted in the shrine’s swastika crest since sickles (which are represented in the crest) were used for tilling and farming the land to make it richer, as a symbol of the shrine's blessings.

There is an approximately 500-meter path from Zuishinmon Gate to Okusha with majestic Kumasugi trees (a kind of Japanese cedar) lining each side which are over 400 years old. The vigor of the tress has not deteriorated, keeping the divinity of the road the same since its foundation. The sun always rises perfectly along the approach on the first days of winter and spring without fail.
The forest reserve of Okusha in Togakushi Shrine (including this cedar path) is designated as a historic site as well as a natural monument by Nagano Prefecture.

Please get off the train at Nagano Station.
You will find scheduled buses and taxis at the front of the station building.

※The bus does not go to Togakushi Okusha Iriguchi during winter since the destination changes to Togakushi Ski Resort. During this time, please walk from Togakushi Chusha or take a taxi.

Services: Available all year except during winter. Access the link for more details.

Express bus services to Nagano Station are available from Tokyo (Shinjuku and Ikebukuro), Nagoya, and Osaka/Kyoto.

Nagano Interchange
・Asakawa Loop Line
This road was opened for the Nagano Winter Olympic Games back in 1998, passing from the northeast of Zenkoji Temple to Togakushi. Large-sized vehicles are also permitted.
・Nanamagari (Seven Turns)
This route goes through the center of Nagano City, taking approximately one hour (depending on traffic). The road is located behind Zenkoji Temple, which is very hilly with hairpin turns. Also, large-sized vehicles are restricted.
If driving a large-sized vehicle, take the Asakawa Loop Line, which leads to the Togakushi Bird Line at Daizahoshi Pond of Iizuna Highland.

Shinanomachi Interchange
During light traffic, this route is relatively easier to follow. It takes approximately 30 minutes to get to Togakushi.
Take Route 18 towards the center of Nagano City, then turn to right at the Issa Kinenkan Iriguchi intersection leading to the entrance of Okusha shrine at the foot of Mt. Kurohime.

Private passenger vehicles are not allowed on the path to Okusha. Please remember to walk when visiting Okusha and Kuzuryusha.

From the entrance of the path leading to Zuishinmon Gate (in the middle of the path)
The slope goes gently upward (almost flat). It takes approximately 15 minutes.

From Zuishinmon Gate to Okusha
The slope becomes steep beyond the approach with cedar trees.
You will climb up stone steps with natural stones mixed in. It takes approximately 20 to 25 minutes.

※The durations described here are just estimates. You need to make a reasonable plan according to your strength and health. You can find roads leading to the Togakushi Forest Botanical Garden and Togakushi Pasture at both the entrance of the path and at Zuishinmon Gate. It would be a good idea to plan a route that allows you to enjoy shinrinyoku (relaxing in the forest), bird watching, or just strolling.

Those who plan to visit the five shrines by walking, you can find a forest path in good condition named Togakushi Kodo, or Kanmichi, which has been used to visit Mt. Togakushi for worshipping from Zenkoji Temple for many years.
※Follow the red-dotted line on the map.

Drive on the Asakawa Loop Line since buses are not allowed to drive on the Togakushi Bird Line (Nanamagari).

※The parking spaces above may not be available during winter due to snow. Contact the Togakushi Tourism Association for details.